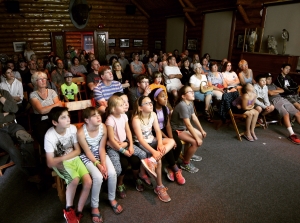 The films that are screened at this film festival will include documentaries about environmentalism, agriculture, adventure, the local food movement and regionally inspired films.

The film festival features digital media camps as well as public screenings of movies in both of these places.

The long term goal for this project is to create a self sustaining tourism event in Riding Mountain National Park that draws people from across the country and the world to celebrate the Park and independent film.

The festival was started in 2012 by local Clear Lake Filmmaker Steve Langston after he traveled to destinations like Banff and Gimli for their local film festivals and saw it as a chance to create environmental awareness through films and also add to the local economy in Wasagaming and region.

Riding Mountain National Park sits atop the Manitoba Escarptment in the Southwest Corner of Manitoba.

The park features  2,969 km2 of protected habitat and the forested parkland stands in sharp contrast to the surrounding prairie farmland.

It was designated a National Park because it protects three different ecosystems that converge in the area; grasslands, upland boreal and eastern deciduous forests.

The park is home to wolves, moose, elk, bear and hundreds of bird species, countless insects and a captive bison herd.

It is most easily reached by HWY 10 which passes through the park. The south entrance is at the townsite of Wasagaming, which is the only commercial centre within the park boundaries.

The park was first protected in 1929 and had much of its public infrastructure created during the 1930s by labourers participating in Canada’s great depression relief programs.

At present the park is a stunning example of pristine Canadian Wilderness that is a favourite spot for people across the globe to gather and enjoy nature.